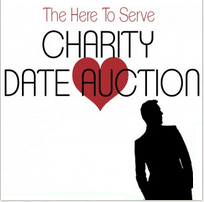 Here To Serve Restaurants is hosting their first bachelor/ bachelorette auction at Aja Restaurant on Tuesday, April 17, with part of the proceeds benefitting Bert’s Big Adventure!

The auction includes a 6pm Happy Hour, 7pm mingling with the bachelors/ bachelorettes, and 8pm live auction. Bert’s Big Adventure has 5 highly desirable Atlanta singles up for auction, ready to date for a cause, including a lingerie football league quarterback and Dolvett Quince of The Biggest Loser.

The three other charities with singles up for auction are the Cystic Fibrosis Foundation, Captain Planet, and the Juvenile Diabetes Research Foundation. Sheree Whitfield of The Real Housewives of Atlanta will be also up for auction for one of the other deserving charities.

Cooper is a 24-year-old Auburn University Alumni. She earned her degree in Hotel
and Restaurant Management, and is currently working in corporate sales for a hotel
company here in Atlanta. Cooper loves spending time with her puppy, Marshall,
going to concerts, art shows, and all the new restaurants in town. She’s also an avid  kick-boxer and loves to travel.

28-year-old Erin Camp, the Consultant Manager at Unbounded Solutions, Inc., in Midtown is a graduate of UGA, and an avid football fan. She has written for publications such as Sports Illustrated and The Red & Black. She has also worked in the nightlife industry for establishments such as Dive Bar, Flip Flops, Hole In the Wall and Kramer’s. Erin has played Lingerie Flag Football for the past two seasons for WPI; last season as quarterback for the Armada Angels. Erin loves dancing, being social, and social events.

Dexter is a 27-year-old personal trainer at Body Sculptor Studio. He has his bachelor’s degree in accounting from  Savannah State University. A fitness enthusiast, Dexter also loves listening to music, playing and watching sports, and reading.

Terence is 47 years old. He attended the University of Memphis and has a huge love for golf and music. Terence enjoys traveling as much as possible, and his favorite destinations are New York, San Francisco and Paris. He spends his spare time volunteering in an effort to give back. Terence has a great sense of humor, and laughs at himself a lot and hopes you do the same.

Check Out The Photos From Our Amazing Holiday Reunion At Santa At Phipps!
November 10, 2016

The Winner Of The Audi A4 From Audi Atlanta Raffle Is…
November 2, 2016