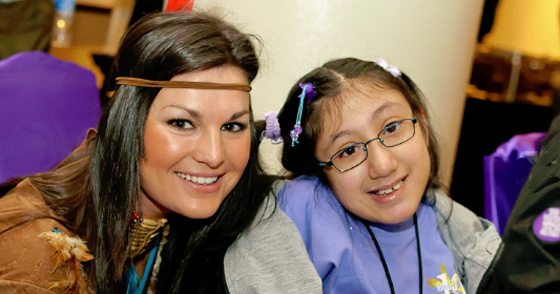 It’s the 10-Year Anniversary of Bert’s Big Adventure and we’re kicking off this year’s trip in a BIG way! Tune in all morning (you can watch it live here) for surprise reveals, magical moments and to get to know the 2012 families!

Check out photos from the day one arrival, and keep up with what’s happening during the trip with the Facebook photo gallery.

Bert’s Big Adventure couldn’t happen without your help, so thank you for making this year’s trip possible!

Find out more about each child on the Bert’s Big Adventure website:

Pictures From The Send-Off Party

Shauna Rudabough from last year’s trip shares a letter for this year’s families:

No trip would be complete with out some shenanigans about one piece bathing suits with Kristin & Wendy:

Brianna E.’s brother cries for his little sister – he just wants to protect her – and his tears are contagious.  And Brianna gets a BIG surprise from the Atlanta Ballet:

The Family of Marie S.

Marie, who was abused by her real parents so badly that they broke her spine as a baby (don’t worry, she’s now adopted by her awesome new moms) received $15,000 from Carter’s toward a family car!

[jwplayer config=”Custom Player” mediaid=”2669″]
Gabe has overcome everything from liver failure, to cancer, to liver rejection, and gave a promise to his mom. His parents were told he had one day to live when he was born, but he survived. He had liver failure, then shortly after was diagnosed with cancer, and was told again that he wasn’t going to live. He then had liver rejection after receiving a transplant – and again was told repeatedly by the doctor that there was nothing they could do. Gabe’s family and their pastor prayed with him, and he said he felt different, despite the doctor saying they couldn’t evade the inevitable.

Gabe’s promise to his mom: “I’m never gonna give up. God has got me this far, he’s not gonna leave me now.”

Gabe never cried when he heard the news of his sickness. In fact, the only time he shed tears is when he found out that his parents couldn’t go on their wedding and honeymoon because he was sick. So, today Gabe’s dad surprised his mom with a proposal and a wedding at Disney…and we have another surprise for both of them.

[jwplayer config=”Custom Player” mediaid=”2670″]
Linda is wheelchair bound, and her family often has a hard time of getting her in the car with her chair to take her places…so Team Direct gave them a van!

Megan’s family talks about her love for animals…so she’s getting to be an honorary Disney animal doctor and meet an animal, as well as a year membership to Zoo Atlanta…and she got to pet an alligator!

Jainah talks about her struggle with lupus. (Side note: this girl is a riot!)

Things you don’t see behind the scenes:

And that’s a wrap!

<< Back To The Bert Show

This Is Inspiration: The Man Who Climbed Stone Mountain For Bert’s Big Adventure
February 11, 2013

We Surprise Another Bert’s Big Adventure Family With A Bus Load Of Disney Characters!
December 20, 2012

If You Want To Understand The Kids Who Go On Bert’s Big Adventure, Read This Letter
December 10, 2012
Go to Top