Catching Up With 2013 Bert’s Big Adv Family, The Rileys 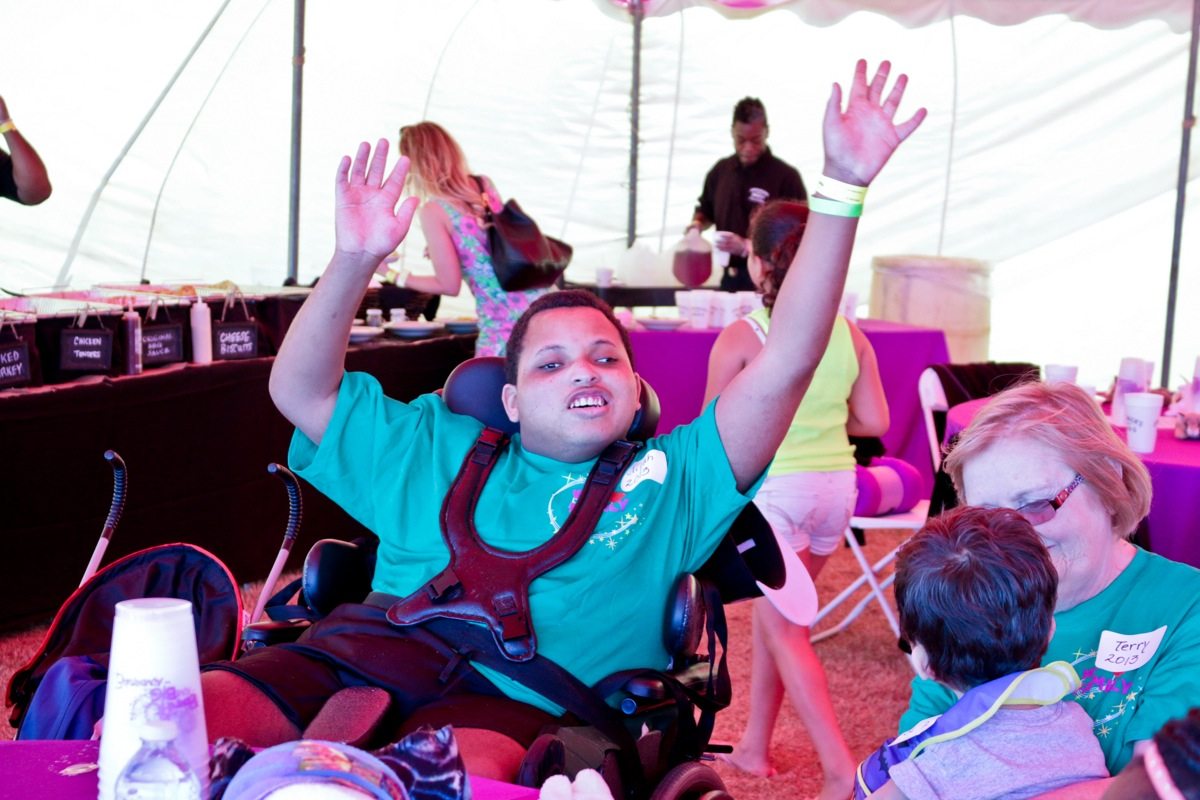 At every reunion, we get to see a myriad of friendly faces from all of our Bert’s Big Adventure families, but not everyone can make it every time; some families just live too far away.

So when the Riley family came down from Indiana to our Spring Reunion at Steeplechase, we were THRILLED to catch up with them!

Here’s a refresher on the stories behind this big and absolutely INCREDIBLE family by our Magical Moments Magazine writer, David Crawford.

Everybody needs an angel in life. Eleven-year-old Elijah Riley was lucky to cross paths with his in the form of foster mother Terry Riley when he needed her most.

“He was a normal 4-year-old boy. While his dad napped on the couch, Elijah found a loaded handgun under a bed and accidentally shot himself under his left eye. The bullet exited out the back of his head…he’s totally blessed to still be alive.”

Young Elijah has walked a long road as a result, having suffered through a skull infection, a cranioplasty. as well as needing to have his brain debrided. He couldn’t walk when Terry first took him into her care.

“When he first came here he couldn’t move or talk…all he could do was smile. It’s been a slow process but he can do a lot now and does more every day.”

Which is exactly why the Bert’s Big Adventure team felt it was time to add ‘fun-filled trip to Walt Disney World with the whole family’ to his list of accomplishments. So when the Riley’s got the call from The Bert Show’s Bert, it was game on. Elijah and his brother, fellow BBA child, Adam, got to enjoy everything the park has to offer and then some. Their mom, Terry, was overjoyed with the whole experience.

“We loved all the shows and getting to meet all their favorite characters. The day at Magic Kingdom was great, but the fireworks and party at Epcot were definitely our favorite.”

Terry quickly found that even more important than all the amenities was being welcomed into the Bert’s Big Adventure family.

“The people at Bert’s Big Adventure are the most compassionate and wonderful people that I’ve ever met. Their sole purpose is to make everyone happy and to make sure all the families make good memories together. It was so wonderful to get to see my kids free from worry and so happy. BBA truly are ANGELS!”

Everybody needs an angel in life…even those like Terry who are angels to others.

“I was fostering three boys at the time when someone told me there was another boy at Riley [Children’s Hospital] we needed to help. Adam was 9 months old, and the children’s hospital had given up on him,” said Terry Riley about her now 5-year-old Bert’s Big Adventure VIP. “They were going to send him to a kids nursing home to die.”

Adam had been diagnosed with Robert’s Syndrome, an extremely rare genetic disorder that is characterized by prenatal retardation and the disruption of cell division. This leads to the malformation of one’s bones throughout their entire body. In Adam’s case he was born with a doubt cleft lip and palate, hands without full arms, heart issues, and one leg shorter than the other. With nearly everyone in his life having given up all hope on him, he’s blessed to have found the hands of such a caring foster mother in Terry Riley.

“I couldn’t believe that was going to happen to him. A few phone calls later we met him and started making arrangements for him to come home and be loved.”

Terry fosters the same love for all of her five children, which includes Adam’s brother and fellow 2013 Bert’s Big Adventure VIP, Elijah. Although only Adam and Elijah technically were VIPs, the entire Riley family got to come along and soak in all the special treatment that Bert’s Big Adventure and Walt Disney World had to offer.

“They were all so great. It’s hard to even pick a favorite moment. Every minute of it…even starting with the amazing send-off party in Georgia or just the airplane rides. The kids all really loved the fluffy beds and the airplane rides.”

By the end of the trip, Terry realized she had a lot in common with the BBA family she’d just adopted.

“My boys are so very special to me. All my children are. They are all happy with so little but Bert’s Big Adventure gave us so much. They let my entire family come join their family, making us all feel so special and loved before, during and after the trip.”